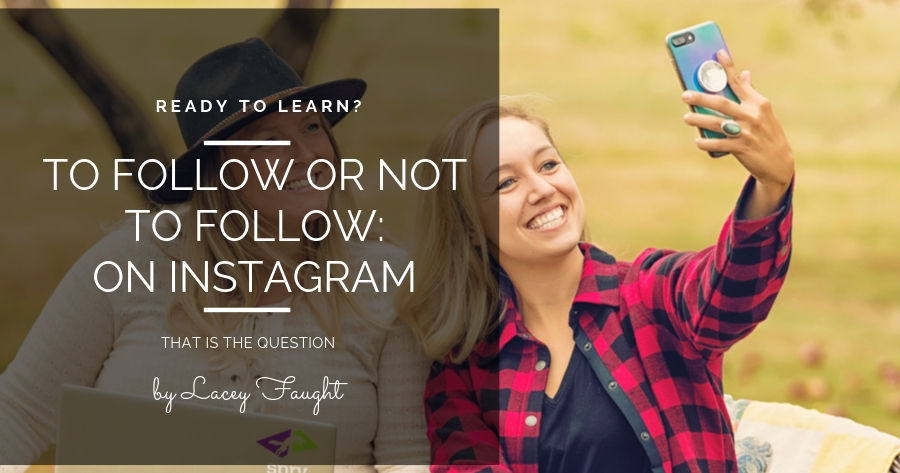 “As a business account, who should I be following on Instagram?”  I get this question all the time from social media managers.

An answer I used for a while is, “people you want as followers!”

You see when you follow someone, they get a notification that you’ve followed them, and they will often view your profile after clicking on that notification and are likely to choose to follow you too if your brand is relevant to them.

I didn’t only advise others to use this practice, I also used it myself on my personal brand and the brands I managed.

I heard a story about a brand who got “blown up” by an influencer for following someone with prejudiced viewpoints.

“Prejudiced viewpoints?!” I thought to myself, “I have no idea what the viewpoints are of the accounts I’ve been following.”

That’s when I started rethinking my strategy and talking to other brands about their opinions and practices around following people on Instagram.

And because my curiosity knows no bounds, it wasn’t enough for me to think about and research the topic, I also wanted to test it with an experiment.  You see I was afraid that by changing my following behavior, I would see a steep decline in my rate of follower increase.  I had to know for sure.  Below is the data from a little experiment I did on just that.

Hypothesis: When I stop following users on Instagram who I wish to follow me, the rate of follower growth on my account will decrease by at least 50%.

After the first 3.5 months:

After the test month:

In the test month, we followed 8 new accounts – that’s about a 1% increase in the number of accounts we followed.

During that same timeframe, we received 55 new followers – that’s about a 17% increase in our total number of followers.

My hypothesis, though not exactly correct, was very close to accurate.

Following accounts on Instagram seems to give you about a 41% higher chance of them following you back, proving that it is a successful strategy to get more followers.  HOWEVER, as a social media manager, you have to decide if that 41% increase in followers is worth the risk of potentially following someone who is in stark contrast with your brand values.  If that contrast is brought to light, you risk losing many of your followers who actually do align with your brand values.

Certainly, there are variables that could have come into play to affect the results of the experiment.

For instance, I didn’t monitor the number of hours spent commenting and engaging with other Instagram users.  If I spent more or less time throughout the control or the test it likely would have impacted the results.

The seasons also started changing between the control and test time periods.  Fewer people were active around the physical location associated with the account I was working on which could have impacted the results as well.

I will likely continue collecting data on this experiment and give another update within the next few months.  I can’t wait to see what else we can learn!